With a HDMI 1.4 interface, the USB Capture HDMI Plus can capture signal from PS4, Xbox One, graphics cards, HD cameras (professional/sports/surveillance/video conference) and other devices. Max input resolution and frame rate is 4960 x2160p60 (4:2:0). It automatically down scale the video to 1080p60 for recording and streaming. Different audio input and output functions have also been added to the devices. The Magewell USB Capture HDMI Plus model captures video up to 1920×1200, 1920×1080 or 2048×1080 at 60 fps over an HDMI interface. It also supports 4K HDMI inputs at 60fps with 4:2:0 color subsampling, or at 30fps for 4:4:4, down-converting them automatically to HD for capture and recording.

Compared to Magewell’s original USB dongles with just an HDMI or SDI input, the USB Capture HDMI Plus and SDI Plus have an input interface as well as a loop through one, which enables monitoring the image while streaming and/or recording. In addition, the new dongles have different audio input and output functions. A 3.5mm audio interface allows for capture of analog audio from a separate audio device (not embedded in HDMI input). An analogue microphone input is available for live narration during capture. This eliminates the need for an additional audio capture device. The 3.5mm headphones interface allows for playback of audio (either extracted from the embedded HDMI audio or from the analog audio input).

Utility V3 is a free software for USB Capture and USB Capture Plus devices. Users can easily check and set the capture-related parameters, upgrade the firmware by themselves and export info needed for technical support with the help of the Utility. 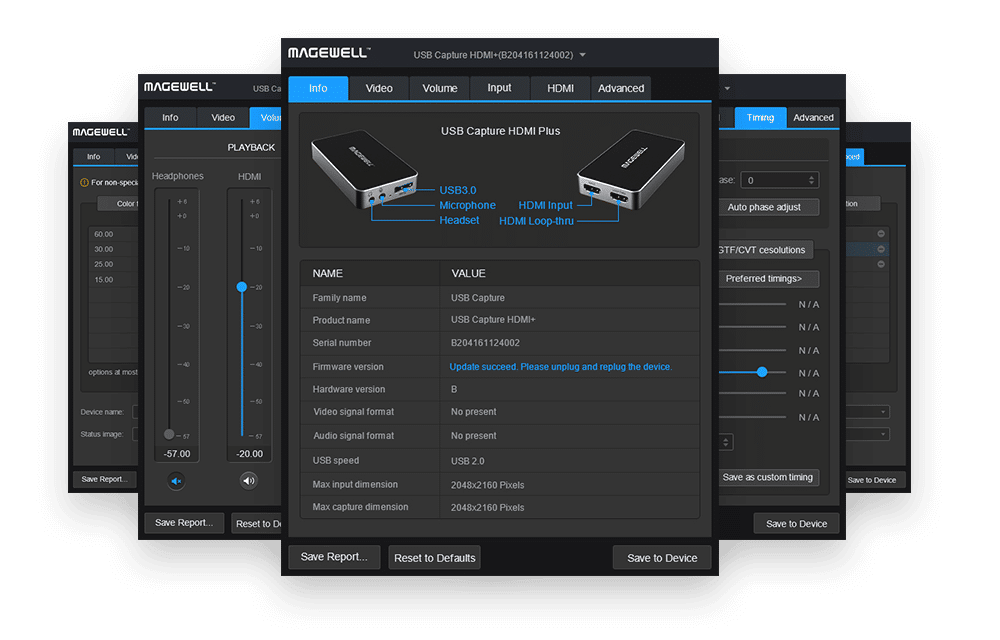